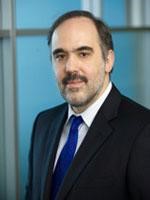 Constantin Aliferis, MD, PhD, FACMI, Director of the Institute for Health Informatics at the University of Minnesota, will deliver the Distinguished Lecture in Causal Discovery, “Very High Dimensional Causal Structure and Markov Boundary Discovery: Key Algorithmic Developments and the Insights Gained about the R&D Process,” at 11:00 am on Thursday, September 241, 2015, in the Rooms 407A/B BAUM, 5607 Baum Blvd., The Offices at Baum.

This talk will present key milestones that enable scalable causal structure discovery algorithms with an emphasis on local algorithms, local-to-global, Markov Boundary, multiplicity and experimentation minimization algorithms. The perspective of the talk is heavily influenced by the work done in my group since 2000.

The purpose of the talk is twofold:

Biography:  Dr. Aliferis received an MD degree from Athens University in Greece in 1990, and an MS in 1994 and PhD in 1998 in Intelligent Systems from the University of Pittsburgh. After completing his PhD, he returned to Greece to complete two years of mandatory military service. At the same time he served as a research associate in epidemiology at Athens University. In 2000, Dr. Aliferis became assistant professor of biomedical informatics and founding director of Vanderbilt University’s MS/PhD Program in Biomedical Informatics. While at Vanderbilt, he was founding director of the Discovery Systems Laboratory (2001-2008), faculty member at the Vanderbilt-Ingram Cancer Center (2000-2008), assistant professor of cancer biology (2005-2008), assistant professor of computer science (2007-2008), and assistant professor of biostatistics (2007-2008). In October 2008, Dr. Aliferis became the founding director of NYU’s Center for Health Informatics and Bioinformatics, Director of the Biomedical Informatics Core of NYU’s Clinical and Translational Science Institute, and associate professor of pathology (with tenure); positions he held until June 2015. In June 2015, Dr. Aliferis became professor and director of the Institute for Health Informatics, and the first University of Minnesota chief research informatics officer, heading the Clinical and Translational Institute Biomedical Informatics program. He will also build and lead a Big Data Analytics Unit for MHealth (collectively the Academic Health Center, Fairview Health Systems, and University of Minnesota Physicians) and carry the title of chief analytics officer. Dr. Aliferis’ research is focused on high dimensional modeling and analysis designed to transform biomedical data into novel actionable scientific knowledge. His three key areas of broad interest are (a) use of advanced informatics and analytics to accelerate and enhance the sophistication, volume, quality, and reproducibility of scientific research; (b) quality and cost improvements of healthcare using Big Data approaches; and (c) precision medicine.

If you need to join the CCD Colloquium remotely, please follow the instructions below.  If you do not have Microsoft Lync installed on your computer, you can join the meeting using the Lync Web Plugin.  You may click on the below link “Join Skype Meeting” to get started and can review the attached documentation on how to install the Lync Web Plugin if needed.  Thank you.

Please Note: Microsoft Lync is now called Skype for Business.  The instructions and functionality in regards to the plugin have not changed.