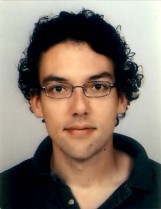 We find that even sophisticated modern causal discovery algorithms are outperformed by simple baselines on these data sets.

Biography: Joris M. Mooij studied mathematics and physics and received his PhD degree with honors from the Radboud University Nijmegen (the Netherlands) in 2007. His PhD research concerned approximate inference in graphical models. During the next three years, he worked on causal discovery as a postdoc at the Max Planck Institute for Biological Cybernetics in Tübingen (Germany). In 2011 he obtained an NWO VENI grant, which allowed him to do a second postdoc, this time at the Radboud University Nijmegen. In 2013 he became Assistant Professor at the Informatics Institute of the University of Amsterdam (the Netherlands). In the next years, he obtained an NWO VIDI grant and an ERC Starting Grant, allowing him to start his own research group, consisting of 3 PhD students and 2 postdocs, focusing entirely on causal discovery. In 2017 he was promoted to Associate Professor. He has published several international peer-reviewed papers and has won several awards for his work.

If you need to join the CCD Colloquium remotely, please follow the instructions below.